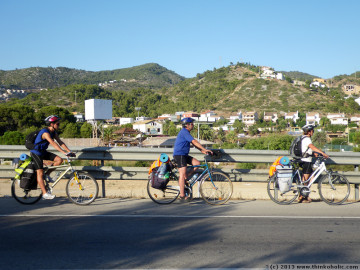 in the long long ago (a.k.a. 2009), my parents, little brother and i embarked on a small adventure through europe.
our goal was to get to denia (spain) right from our doorstep in rum/innsbruck (austria), using only our bicycles, while keeping the budget as low as possible. to make things a bit more interesting, we split up into two teams racing each other: team 1 (mom and dad) took a route through italy and france, team 2 (anton and i) went through switzerland and france. the team that arrived at our destination first, would win.
we sent a postcard home every few days to record our progress along the 2200 km journey and prove when we were where.

…here’s part three of our adventure: teams one and two – anton and i, reunited with our parents – cycling south from figueres, spain (near the french border) south towards our destination, dénia. 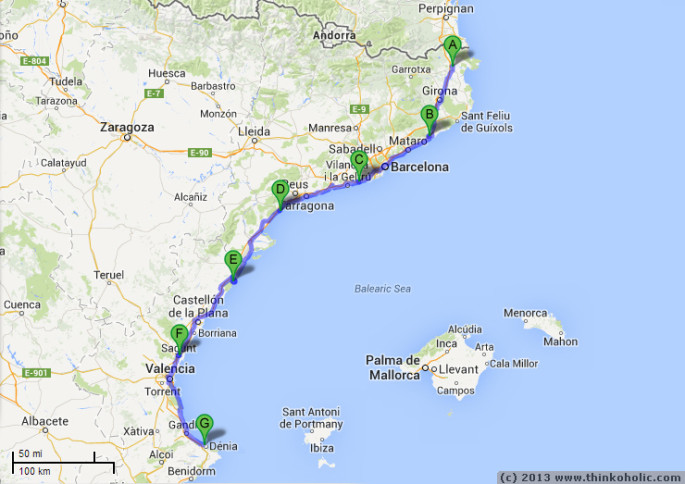 2009-07-27: Figueres, Spain – Santa Susanna (102 km, 5h 45m)
freshly awoken by a car alarm, we started into day 16 as a team of four, and began part 3 of our journey: spain. our route took us along the N-11 national route, which we shared with *a lot* of cars and trucks. halfway into the day, after some litteral ups and downs (the route was quite hilly), we decided to leave the N-11 for a break off the main road. to our complete surprise, one of the first shops we saw in girona sud, was an enourmous decathlon sports shop. a very welcome sight considering that anton had been making do with only a third of his gears for two days. hurray! :)
a short break and some high-energy snacks (read: fast food) later, we were back on our way and soon crossed the provincial border of barcelona. the obligatory team picture included a seemingly abandoned folding chair, which turned out to belong to a prostitute who returned from a quiet driveway after we had taken the picture. oops!
we found a suitable camp ground in santa susanna (little did we know about the nearby train’s night schedule), where dad quickly organized a borrowed table and chairs using only german words and ending “-os” as “the spanish ending of all words”.

2009-07-28: Santa Susanna – Sitges (105 km, 6h 07m)
day 17 started with another parting of teams 1 and 2, but that wouldn’t last very long. anton and i (team 2) enjoyed an enourmous “pan con crema” as breakfast, and made our way towards barcelona. trying to get off the main road and onto a dedicated bike route, we squeezed through the tiniest pedestrian underpass only to find a road block on the other side. undeterred by this, we pushed our bikes across and continued on a beautiful bike road right by the sea. not long after, we ran into a second road block which, after short consideration, anton decided was too much (involving a fenced boardwalk and breakwater boulders). back through the underpass (and road block #1), we continued along the N11 and encountered 3 elderly racing-cyclists, who we decided to follow them through the city and past the occasional red traffic light. we didn’t have a clear plan on where to go, and gladly accepted their offer to guide us to the city center. shortly after we concluded our obligatory “sagrada familia” photo stop and biked on, our parents texted us from a cafe opposite the infamous basilica. they were fast!
together we continued southwest through barcelona – escorted in one part by a friendly local motorbiker who offered to show us the way. around lunchtime, i had the strange (but actually quite nice) feeling that i was floating beside me. (much later, a diabetic told me about her early symptoms of hypoglycaemia, which included this feeling.) we decided to ramp up our calory intake from that time on, and stopped at the first mcdonalds for a high-energy lunch.
the last part of the day’s route led us to the stunningy beautiful (but very high-traffic) coastal road to garraf, and further on to sitges.

2009-07-29: Sitges – l’Hospitalet de l’Infant (103 km, 6h 00m)
after a night on the spacious gravel field that was our tent space, day 18 actually started out quite nicely. having passed through barcelona the day before, the city of valencia was now the next landmark on our map and made its first appearance on street signs. we continued south-west along the coast. in the village of tamarit, we ran into a road block of the N-340 route that we had been following. there was no alternative road to the next village (apart from the autopista, from which are cyclists banned for obvious reasons), so after 30 minutes of searching we eventually ended up on a small hiking trail parallel to the main route. this route, however, soon brought us to a turnstile which was tricky to get through, with 4 fully loaded bikes (10+ kg of baggage). we did manage, and continued a short way only to find …another turnstile. about an hour after first running into the road block, we emerged within eyeshot of our starting point, just 700 meters along the (closed) route. lesson learned that day: ignore road all blocks to the fullest extent possible. :)
the rest of the day was rather uneventful: the drive to tarragona (practically alone on the still closed national route), a wonderfully greasy fast-food lunch* in tarragona followed by a short nap, and the late-evening drive to a camp ground at the far end of l’hospitalet de l’infant.

also worth noting: the saying “like father, like son” seems even more true if both share the same first name. :)
at their first (not really serious) attempts in completely independent situations, both anton and dad just tried to fit their bikes through turnstiles “as is”. we only noticed the similarity between these photos (from day 1 and day 18) later, when organizing them back at home.

2009-07-30: l’Hospitalet de l’Infant – Peñiscola (96 km, 5h 26m)
as we moved further south every day, midday temperatures rose steadily. that’s why we noted down the weather of day 19 simply as “hot!”. anton started his day by getting up earlier than everybody else, and going for a morning run. after a quick breakfast, we regrouped and team 2.b (that’s me) started ahead of (team 1 + team 2.a(nton)). i had been looking forward to a quiet day to let my mind wander, but was soon drawn into a 45+ minute discussion with a racing cyclist. according to our notes, the day’s most interesting event for anton and team 1 was a break at a gas station, which included a short nap for dad. :)
after a relatively quiet, scenic tour along the national route, we reunited at a camp ground in peñiscola, 96 km from our starting point.

2009-07-31: Peñiscola – Sagunto (115 km, 6h 30m)
our “second day of punctures” (day 15 being the first in the series) actually started out quite nicely. teams 1 and 2 got up at 7 a.m. so we could make some distance, and just barely avoided spending half the day on a gravel road because nobody wanted to look at the map legend. by midday, we had covered the first 50 km of upward-downward route, and dad got a flat back tyre. the bike was disassembled and the tube exchanged. then we discovered that the italian tube’s valve stem was incompatible to our pumps. so, instead, we had to patch the old tube and replace the new/wrong one.
less than 15 minutes later, anton’s back tyre was completely devoid of pressure. without a suitable spot along the route national, we decided to go on and pump up every few hundred metres. a small, secure area allowed us to also change that tube – except that a small pebble got caught between the inner tube and tyre that time. the pressure dropped instantly, and spirits sank slowly but steadily.
anton and i crossed the N-340 to reach a gas on the other side of the road, when – for just one instance that hour – there were no cars on the national route. crossing back would later take us ~20 minutes and some nerve. we also patched that puncture, changed the tyre again (twice – first wrongly, then correctly), and were eventually back on track. anton’s mood at that point was captured quite nicely in the trip journal: “if there’s one more problem now, i’ll walk!”.
arriving in castellón de la plana at 4 p.m., we finally recharged with a lunch break including refrigerated beverages and bocadillos con jamon (a spanish type of “serrano ham sandwich”). by 8:30 in the evening, we had covered the other 40 km to (almost) sagunto. there, where we bought an oversized melon from an elderly farmer’s couple, shopped for dinner and breakfast at the local supermarket, minutes before it closed, and found our journey’s last camp ground. day 20 was mastered.

2009-08-01: Sagunto – Dénia (134 km, 7h 40m)
at last, our final destination was within reach. it would take some extra kilometers, but we were determined to finish this bike trip on day 21 – exactly three weeks after we set out.
we started the day just before 9 and headed for valencia. on our way there, we learned a very important lesson for life: don’t trust advice you didn’t ask for! a friendly passer-by/”runner-by” suggested we follow a more quiet road off the main street. we gladly followed his advice, and soon ended up in a dead-end street leading to the beach. thanks!
once in valencia, we did the obligatory “tonis’ sight-seeing tour” (read: dad and anton lead the way, and we all got lost). a quick stop into the city’s main tourist office revealed that nobody there spoke any english. anton and i eventually managed to get the needed information using our rudimentary spanish vocabulary (his was better than mine). :)
back on track, we passed through nature reserves and extensive rice fields. then, just north of the city of cullera, it happened:

me: anton, in case you’re wondering about the throbbing sound:
your sandals are touching your back tyre.
anton: it’s not the sandals.
-BANG!-

at 17:07, and 42 km short of our 2202 km of total distance, anton’s back tyre litterally exploded, and left us with a completely busted inner tube and a gaping tyre hole with only threads sticking out. it was a late saturday afternoon, so of course, nearby shops were either closed or didn’t have any right-sized bike parts. we improvised macgyver-style, using a cut-up plastic bottle and some insulating tape to restore anton’s mobility – though it was now a somewhat bumpy ride.
we headed south again, still determined to arrive at our destination before midnight. night fell soon after a beautiful sunset behind us. we continued along the national route, equipped with bike lights and headlamps. at 10 pm that night – after 2200 km*, 134 hours of pure in-motion time, and 52000 burnt calories – we finally arrived at our holiday apartment outside dénia, spain.

that night, we took some well deserved (and necessary) showers, called our loved ones, and went out looking for dinner at 23:30. luckily, an asian restaurant was still (barely) open nearby.
the following day, it felt really strange to wake up in a real bed, and to not get up early, pack and cycle on. instead, we slept in, went grocery shopping (by bike, of course), and then moved as little as possible. our neighbours were convinced that the language barrier caused the “misunderstanding” regarding our mode of transportation. :)
we celebrated the successful completion of our little two-wheeled adventure (race-turned-family-trip) through europe with traditional paella valenciana and paella mixta.

*note: while the daily recorded distances only add up to 2187 km, the overall distance travelled was 2202 km, according to our gps. the missing 15 km are due to short dinner/shop/sightseeing trips after arriving at the camp grounds.