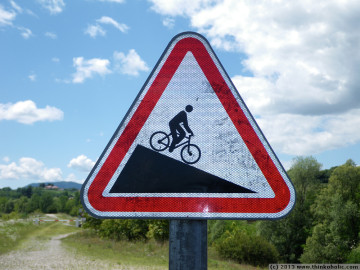 in the long long ago (a.k.a. 2009), my parents, little brother and i embarked on a small adventure through europe.
our goal was to get to denia (spain) right from our doorstep in rum/innsbruck (austria), using only our bicycles, while keeping the budget as low as possible. to make things a bit more interesting, we split up into two teams racing each other: team 1 (mom and dad) took a route through italy and france, team 2 (anton and i) went through switzerland and france. the team that arrived at our destination first, would win.
we sent a postcard home every few days to record our progress along the 2200 km journey and prove when we were where.

…and now, part two of our adventure: team two – anton and i – making our way from the swiss-french border, south through france, and following the coast from aigues-mortes to the french-spanish border. 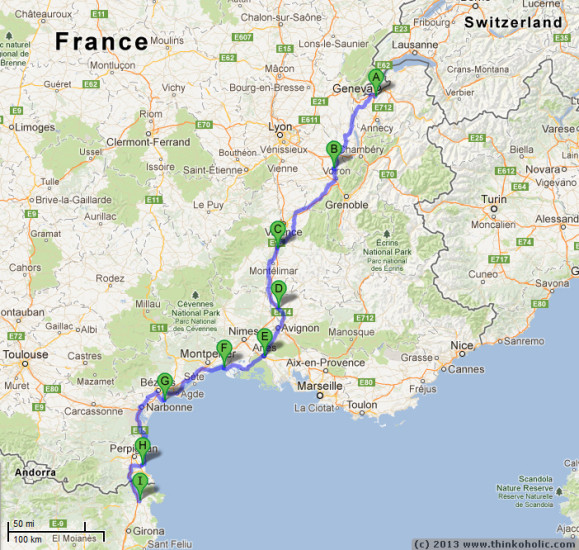 2009-07-19: Neydens – Bilieu (119 km, 6h 22m)
day 8 of our bike adventure is still as vividly in my memory – after four years – as if it were last month. we started with our daily breakfast ceremony (the compulsory chocolate croissant), followed by a bit of up-and-down road in northwestern direction which then turned into a steady descent into frangy, where we bought the day’s dinner (pasta. same procedure as every day.) and another round of breakfast (pain au chocolat). what followed was one of the most beautiful stretches of bike track along the rhone river from seyssel (ain), right to its bend at saint-genix-sur-guiers.
right there, the french reminded us a lot of tyroleans: a blocked section of the bike route was simply “unblocked” by fellow bikers, who had torn down mesh-wire fences and metal barriers, and continued right through a construction site (closed that sunday).
our route also took us through the little, seemingly ancient village of peyrieu (population 791), where we (1) found much-needed emergency drinking water at a cemetery, (2) discovered that the water was in fact undrinkable, but also found an actual fountain to refill our bottles, and – most memorably – (3) came across a booth of seven elderly ladies selling hundreds of tartes (savoury and sweet). we didn’t find out who else they were selling them to, because there seemed to be nobody else around… stocked up with wonderful, tasty tarte pieces, we headed on to the last 25 kilometers (very hilly!) towards bilieu, which features lake-side camping at the lac de paladru.
that evening, we first noticed that our calory intake apparently wasn’t quite enough: following our daily pasta dinner, we enjoyed our special tarte dessert, and eventually gave in to strong cravings for chocolate crêpes and coca cola.

we awoke to the sounds of ducks, dogs and crickets and quickly made our way south and downhill. the ninth day had started, and our bad weather spell seemed to be over once and for all: it was, in fact, so hot and sunny that we had to use every opportunity to refill our water bottles.
our stopover in valence (drome; 100 km into the day) was limited to a picture at the main square and a quick visit to a tourist office, and we decided to make the most of the day and keep moving. just outside of town we stopped at a fruit stand for cherries, apricots and greengage plums, and were greeted with the words “you’re late! the tour de france bikers came through here five days ago!” pity!
finding an open campground turned out to be the challenge of the day, and so we continued all the way to saulce-sur-rhône, where we arrived at 20:45 after exactly 150.0 km and 7 hours, 58 minutes and 12 seconds of driving time.

2009-07-21: Saulce-sur-Rhône – Orange (76 km, 4h 32m)
due to a lack of dedicated bike routes between saulce and orange, we spent day 10 mostly on the “route national”, accompanied by cars and trucks. the day started with a boulangerie that wasn’t just out of “pains au chocolat”, but only had one tiny (and rather measly) croissant left. so much for our chocolate bakery breakfast tradition, which was already up to 3 servings by then. ;)
strong headwinds made us take turns of driving in each other’s slipstream. also, biking right through a nuclear power plant, in pierrelatte, was quite …interesting.
we also made some great experiences that day: for example, the driver of a huge truck sounding his horn to thank us for letting him pass on the street (you needed to be there). or, me clumsily dropping a scoop of icecream (2 euros each!) late at night in orange, and apparently looking so devastated that the icecream sales girl handed me another scoop for free. :)

2009-07-22: Orange – Arles (77,25 km, 4h 12m)
“weather: headstorm.” after our daily breakfast of 3 “pains au chocolat”, we treated ourselves to a late start (around 10:30) and headed south once more. soon, there was some mild headwind.
first stop: the city of avignon. the obligatory picture in front of the “pont d’avignon” was followed by a desperate – but ultimately, successful – attempt to escape the maze that was the ancient fortress. our loot: a giant ciabbata, an entire salami and some brie cheese. the headwinds continued.
the rest of the day was rather strenuous. several times after leaving the city, the winds were so strong that we had to actually dismount our bikes for safety. we took it rather lightly that day, and had to stop a few extra times because of heavy laughter about the situation. we reached our day’s goa (arles) eventually, followed our daily homemade pasta dinner routine, and rounded our day off with a short bike trip through the beautiful historic town centre.

anton’s memo for the day:

the woman in front of us paid 36 euros in coins!!

2009-07-23: Arles – La-Grande-Motte (108 km, 5h 57m)
day 12: a little detour, a family meet-up, and more headwind. biking straight towards the coast turned out to pose one major drawback: headwinds, so strong that, again, we had to push our bikes for about 2 km and still try not to be blown away by the wind. our day’s route first took us from arles to saintes maries de la mer in the midst of the parc naturel regional de camargue – western europe’s largest river delta and an area of extraordinarily beautiful wetlands and marshes. at least that’s how it was described to us. as it turned out, we would not see as *little* water during an entire day than in the week before and afterwards. what we did see, however, were horses, standing in the wind so perfectly still that it took us some time to realize they were actually alive. anton’s explanation: “they’re probably on a break”.

continuing inland from saintes maries, we were treated to some much-appreciated back wind and headed on to aigues-mortes. within a mere hour of our arrival, our parents got there as well! they were coming from aix-en-provence (on their route through italy and the french riviera), and had put in an extra 50 km the previous day so we could meet up. had we gone by car, we probably wouldn’t have been able to achieve such great timing! we exchanged the first set of bike stories at a merry family reunion coffee (and hot chocolage), and continued as a team of four to our destination for the day: la-grande-motte.

note regarding the “empty text message” picture: our beloved grandma always managed to answer text messages, but had problems sending one of her own. the result was an occasional empty text message from granny, which meant that she was thinking of us, and it was time for us to write to her. :)

2009-07-24: La-Grande-Motte – Valras-Plage (108 km, 5h 57m)
we treated ourselves to a late start (and blamed it on the previous evening’s celebratory pizza and drinks) and left the camp ground (“la petite motte”) together with our parents. going west (first time in france), our route led us through a beautiful strip of sand dunes between the mediterranean sea and two lakes (ètang de l’arnel and ètang du méjean). enjoyed a quick family breakfast in palavas-les-flots, and headed on to sète, where the two teams split up again and continued with the original race. however, the advantage of youth stayed away: while anton and i continued right away, and without a dedicated lunch break, our parents stopped for a nap in sète and took a more relaxed approach. in the evening, we found out that we had set up camp just one village from our parents. winning the race would be harder than we thought!
two more notes from the journal:

2009-07-25: Valras-Plage – Saint-Cyprien (125 km, 6h 43m)
day’s motto: “flat tyre, torn wire”.
our immaculate headwind spree finally came to an end on day 14. (if you think there’s too much talk of headwind, you probably haven’t experienced it yourself on a longer-term basis. ;) ) we crawled our way up a hill near leucate – still with headwind – and suddenly enjoyed wonderfully comfortable backwinds, which helped us effortlessly reach 40 km/h on the plains that followed the descent.
the joy didn’t keep very long: anton noticed that he couldn’t switch his back-tyre gear anymore (i.e. he now had 7 instead of 21 gears to choose from), and shortly after, we had our first flat tyre. the first problem was due to his back gearing cable being reduced to a single thread, which soon broke. the latter was caused by the not-so-smart idea to take our bikes into a field by the side of the road for lunch – a field that later turned out to be full of spikey plants. a bit of improvisation, though, and we were back on track.
our day ended in saint-cyprien, about 1500 km into the trip, 40 km from the spanish border, and just 700 km from our ultimate bike09 destination: denia, spain.

buenas dias, españa! the day started with another flat tyre, this time on my bike. we started a little late, with a seemingly fixed tyre and an immediate next goal: our traditional pains-au-chocolat breakfast. our parents called, telling us of the numerous warnings they had received about taking the heavy-traffic coastal route by bike. we followed their (and the locals’) advice and chose to continue on the beautiful inland route to le perthus. on our way, we found several more spikes still embedded in our (my) tyres and eventually decided to just keep adding air manually every few kilometres, rather than trying to find all the punctures. due to a lack of spare gearing cables (and cycle shops), anton was still limited to 7 instead of 21 gears. team 1 had somehow managed to overtake us, and already waited in a cafe in le perthus. another family reunion!
a family picture at the spanish border, another tyre check with expert help from dad, and we were on our way once more as a team of four.
the day ended in pretty much the only camp ground near and far, in figueres, spain – but not before a luxurious dinner feast was cooked up with not one, but two minimalist camping stoves. fancy!

continue to part three, and find out about the final section of our route, from figueres all the way to our bike09 destination. be sure to read about our journey to barcelona, valencia and denia, including a few minor odysseys, alarmingly low blood sugar levels, a distinct change in diet, and a full-fledged tyre explosion.