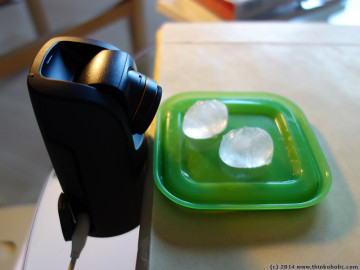 in a recent blog post, i detailled the results of my search for a viable construction time lapse camera. the short version: the TLC200 Pro by Brinno sounded like the best option considering viewing angle, long-term usability and pricing.

the camera and some accessories were delivered recently, and i found the answers to some of my original questions. in this article, you’ll find a short review and my initial experience with brinno’s “pro” time lapse camera. 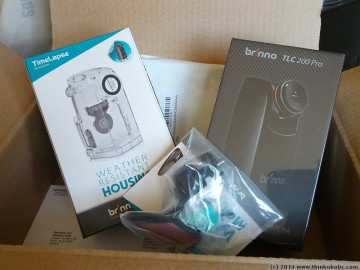 the current firmware (v1.01.5) was already preinstalled, so no firmware update was necessary. navigation through the menu is pretty straight-forward using the three buttons (“Menu”, “Time”, “OK”). the camera’s standard settings were medium image quality (“better”) and 10 fps video frame rate – you might want to change the latter one to a higher frame-rate to get more fluid movements. if you forget, there are tools to change the frame-rate without image quality loss (see “test videos”).

the camera itself takes SD cards up to 32 GB in capacity, so there’s potential space for about 240.000 frames (“good” quality) or roughly 100.000 frames at “best” quality. however, the manual (page 16) mentions that avi files are “limited to between 8.192 and 20.480 frames, depending on the time interval setting”, which is probably in reference to the file size limit of 4 GB for fat32 formatted sd cards (and completely unrelated to the actual interval setting).

update 2014-04-27: reader adwheeler (see comment below) says that files are closed when they reach 4 GB, but recording continues into a new file that can later be appended to the first file.

two side notes regarding the housing and wall mount:

will the “Timer” feature activate just once, or daily?

update: according several comments to this post (see below), the timer activates daily, but creates separate files for each day that you’ll need to merge afterwards.

does external power also charge the batteries?
unfortunately, no. the camera restarts when being connected to external power, i.e. it loses power for an instant while changing power source. Rechargeable batteries are not being recharged when running on external power.

when are Eye-Fi files uploaded/available? 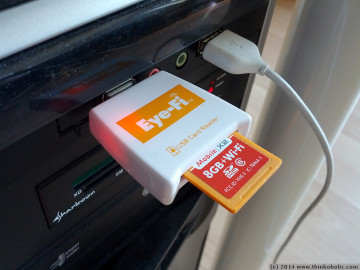 my hopes were high that an Eye-Fi card would allow me to upload a daily version of what’s been recorded so far. while this is possible using the timer function (which creates separate, daily files), in a continuous recording the avi-file is completed only at the very end of the recording, and Eye-Fi will only upload completed files.
with Eye-Fi’s handy (optional) upload notification emails, it may also be handy to use an Eye-Fi card so you’ll be notified when the camera has stopped recording. unfortunately, i didn’t get around to testing whether this also works when the camera crashes or reboots unexpectedly (e.g. during a power outage when on external power).

is the camera really compatible with Eye-Fi?
while testing the camera and card for a short few days, i noticed the camera frequently froze at the “Reading SD Card” screen when booting with the Eye-Fi card (Eye-Fi Mobile X2 8GB+WiFi) installed. removing and re-inserting the card always solved the problem, but it’s not nice to have this happen, especially in the field.
there was no more time for more testing and troubleshooting this problem, so i can’t say whether this was caused by the card or the camera, but it never happened with the standard 4 GB card.

update 2014-04-27: adwheeler (comment below) says he has not encountered such problems with an Eye-Fi pro x2 card. if you’ve used an Eye-Fi card with your Brinno TLC200 pro, please share your experiences in the comments section!

video #1
for the first TLC200 Pro test video, i just set the camera to an interval of 2 seconds and “best” image quality. the low default video frame rate (10 fps) was later changed to 30 fps using avifrate (no change to image data). basic setup was really easy, even without reading the manual.

as you can see, the image quality is generally quite nice. the light hickup in white-balance is probably due to the direct sunlight. reflections result from indoor use about 5 cm from the window. part of the middle tree is blurry due to a dirt speck on the window. 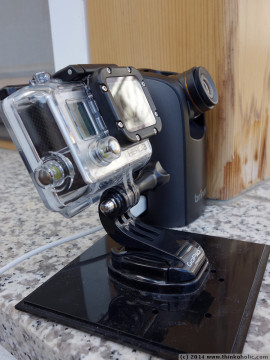 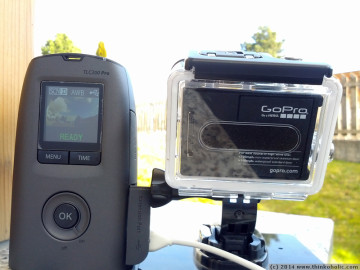 gopro settings: 2 sec interval, 12 MP resolution, Protune off. the full-hd video was created using GoPro Studio, with no changes to image data except for resizing.

the comparison shows the strengths of both systems: the TLC200 Pro does everything by itself, no post-processing required. image quality is not bad, but it is, after all, only a 720p video (1280×720). the optional time stamp at the bottom of the video is a nice touch, especially for longer-term recordings.
also, the camera’s four AA batteries should last quite some time, especially with the camera going to power save mode in between pictures. the camera ran on external power during this test, so i don’t have specific numbers.

in contrast, the Hero3 Black’s image quality and resolution is simply stunning, and the resulting full-hd (or bigger) videos are just beautiful. as a downside, the minimum resolution of 5 megapixels means that you’ll need a big sd-card. also, intervals are limited to 60 s max, and the camera gave its first “low battery” warning after 55 minutes (wifi on, outside setting at 5-10°C), so storage capacity is probably not be the primary limiting factor here.

video #3: close focus
the next video is an image quality test at close focus. the closer of the two ice cubes was about 4 cm from the lens, a cheap fluorescent lamp to the left, about 70 cm behind the setup, was used for lighting.
interval and duration: 1 s for 2 hours (later sped up 4x using avifrate).

the camera did a great job at close focus, and the f/2.0 lens created a nicely blurred background.

the TLC200 Pro is now installed semi-outdoor to document a construction project, and i’m very eager to see the outcome.