this pair of orange skunk clownfish or yellow anemonefish (amphiprion sandaracinos, de: östlicher weißrücken-anemonenfisch) was living in one of the most beautiful and diverse reefscapes i’ve ever seen, near bomba in the togean islands (sulawesi, indonesia).
they seemed a bit too big to hide in their anemone, so it was quite cute when they tried continuously to bury themselves in the tentacles. 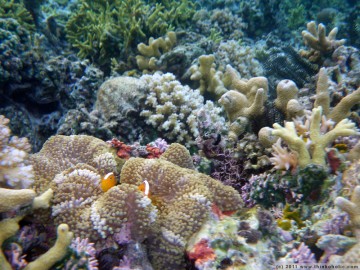 the ecology of clownfish and their symbiosis with sea anemones exhibit many interesting features: for instance, anemone fish are protandrous, meaning that all the fish are born male, and later change sex to female. there’s only one female per anemone, and it’s the largest, dominant fish. when it dies, the second largest (male) takes its place, gains weight and becomes the female.

another fascinating part is the immunity to the anemone’s nematocysts: it’s apparently based on a combination of acquired immunity towards the anemone’s toxins and a protective layer of mucus which prevents the anemone from “stinging” (firing its nematocysts). sources are still inconsistent about whether this mucus is produced by the fish or their host. however, clownfish can only live in 10 out of 1000+ species of sea anemone. 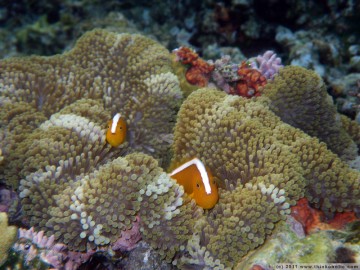 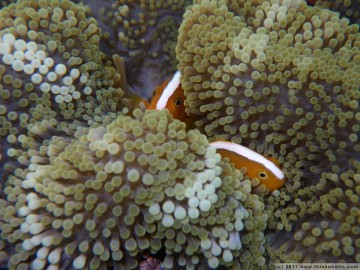 if i got you interested, you can find some basic information here: an exploration of the clownfish (tree of life)