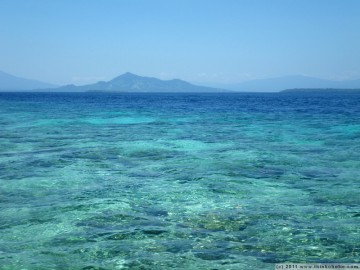 part one is about the first of just over 5 weeks (roughly 4 weeks on sulawesi and 1 week in lombok), in which we visited the island of bunaken and the cities of manado and tomohon.
as we found out, bunaken is one of the top diving spots in the world – and there’s a reason for it: we enjoyed some splendid reefscapes (both diving and snorkelling) and incredible drop-off walls up to 50+ meters deep. the corals were some of the most beautiful i’ve ever seen (which isn’t really to say that i’ve seen that many). apart from nudibranches, which always enthuse me, we saw a wide variety of wildlife, including green turtles (chelonia mydas, pictures) and the undescribable mandarinfish (synchiropus splendidus, pictures).

back on the main island (sulawesi), another must-see place was the market in tomohon. the local minahasan people are said to eat “everything with 4 legs, escept for the tables and chairs”, and what we found at the market was gross at the least (you may want to skip some photos at the end if you’re feeling sensitive).

regarding accommodation, we stayed both at the worst hotel that i’ve ever, EVER seen, and at one of the nicest ones of our entire trip:

warning: there are some very graphic images depicting dead animals near the end of the gallery!

a gallery with german descriptions is available here.

hotel new angkasa in manado (sulawesi). it definitely looks better in the pictures.

our friendly neighbour at new angkasa

change of hotels: rex in manado. was much better, but the pictures still don’t do it justice. the rat was replaced by an enormous cockroach in the bathroom.

instead of cutting filets or sharpening his knife, he just used a piece of wood to slam the blade through its spine.

a bendi (horse/pony carriage) loaded with 4 people and 2 12 kilogram backpacks. we wanted to walk, but were picked up by a friendly hotel employee.

on our way to pulau bunaken, north of mainland sulawesi.

bunaken kuskus resort – the garden really is as lush as described in the travel guides.

the beach just off bunaken kuskus. the reef starts about 30 meters in.

the reefscape just in front of bunaken kuskus resort.

thousands of fish swim near the drop-off.

trumpetfish (aulostoma chinensis) have a very extensible mouth and use suction to capture prey.

the small road towards bunaken village

we saw the mandarinfish (synchiropus splendidus) during a special “mandarin dive” at nightfall. incredible!

waters so clear that the coral was visible from the boat

clark’s anemonefish (amphiprion clarkii) makes it clear that i’m getting too close to their anemone.

local women playing domino on the boat to manado

one of the usual dangers that pedestrians face in indonesia.

the door of the public bus wouldn’t have kept shut without the blue string.

“i’ll have 7 onions, some chillis, and the baby, please.”

please continue only, if you’re prepared to see dead animals.

forest rat. since it’s only sold raw, we didn’t get a chance to taste… (tomohon market)

forest rat. since it’s only sold raw, we didn’t get a chance to taste… (tomohon market)

… and their previous owners. (fruit bats sold at tomohon market)

this was probably the most disgusting and unsettling thing we saw in indonesia: dogs for sale at tomohon market

this was probably the most disgusting and unsettling thing we saw in indonesia: dogs for sale at tomohon market