gopro studio software is a simple, straight-forward and free video stitching software.
in short, it’s awesome. however, in a recent video project i experienced two distinct problems: whenever i saved, closed and reopened a project, the opening title (video track) was reset to standard values (content, formatting, length), and titles (title tracks) were shifted a few seconds to the right.
here’s a quick overview of what causes these problems, and what you can do to stop them from happening.

the problem: titles in the title tracks (resulting in overlay text) are aligned perfectly with their respective video clips. after saving the project, closing gopro studio, and re-opening it, these titles are shifted to the right in the timeline, i.e. they are delayed and appear later in the video. this can happen at the beginning of the video, somewhere in the middle, or near the end. however, it always continues to the end of the video. 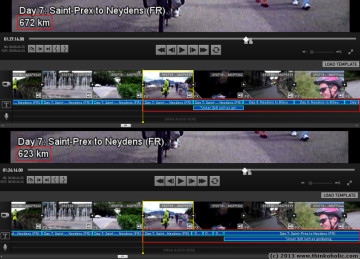 the cause: the problem seems to be caused by individual video clips, used in the project, which are either (1) not accessible (e.g. renamed or moved), or (2) were changed/reverted to an incompatible video format (i.e. original avi saved over a file that was imported and converted using step 1 in gopro studio).
there is no error message or other sign when gopro studio can’t find a video file. missing files are not displayed in the timeline, but remain referenced in the project file. the only symptom is that the timing of titles and audio is changed whenever the project is freshly reopened.

the solution: the best way to deal with such a problem is avoidance. don’t change your video files (i.e. move, rename, replace, …) once you’ve started editing them together.
if it does happen, there are two ways that may help you find the source of the problem:

as soon as gopro studio can again access all the files that are referenced in the project file, the timeline is restored exactly as it’s been saved, and all is well.

the opening title reset is also a bit of a nuisance, but at least it only affects one frame.

the problem: a sizeable video project starts with an opening title (title added to the video track). when the project is saved, closed, and reopened, this title (always only the first one) is reset to its defaults. the title content is set to “Title”, and formatting and the duration of display are reset to standard values. interestingly, when opening a large project you can even see the correct title for an instant, before it is reset.

the cause: it seems that the title reset is also caused by a missing video somewhere in your project timeline, so the above method – though potentially very tedious – should fix this one as well.

the solution: what solved the title reset for me (before i discovered that a video file was missing) was to insert an actual video clip in front of the first title. to make this as simple and unobtrusive as possible, i created one black jpg with the desired video’s resolution, imported it to gopro studio with step 1 (import & convert), and created a “time lapse” video with a framerate of 2 s per frame (via advanced settings). this clip was then inserted at the very beginning of the project, and set to display only a fraction of a second using the “mark in” and “mark out” positions.

the typical amount of passengers on a scooter in thailand