piz val gronda, a summit right at the swiss-austrian border, used to be a site of beautiful biological and geological diversity. it used to be home to several species very rare in austria, most notably, the rock partridge (alectoris graeca) and a species of hawksbeard (crepis rhaetica). it also features a unique landscape with geological rarities (at least in austria) such as gypsum sinkholes (dolines). 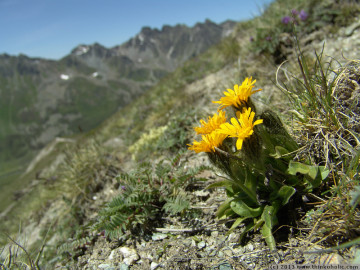 late last year, after more than 28 years of trying, the ski industry eventually won and was granted permission to build a ski lift up to the top of the mountain. that is, ignoring several nature conservation expert’s reports that warn against a pristine and unique ecosystem being damaged or lost forever. the european union has announced preparations for an investigation into austria’s incomplete natura 2000 implementations, but meanwhile, the diggers are already in place and construction is set to begin very soon.

i took part in a botanical excursion to the area in question, two years ago, to learn more about its inhabitants and beauty. in this post i’d like to present some very rare plant species from the region, as well as other botanical highlights: carex bicolor, carex microglochis, crepis rhaetica, juncus triglumis, poa glauca, primula integrifolia, taraxacum handelii and taraxacum pacheri.

to the countless people, institutions and conservationists who tried to preserve the piz val gronda for the future: thank you for your efforts!