i took this picture while snorkelling in sulawesi, indonesia. right then, all i knew was that it looked like it didn’t quite belong here: a sort of big, solid, reflecting gas bubble, nestled in between laminae of stony coral (merulina cf. ampliata): 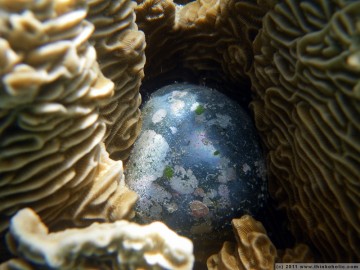 sea pearls, also called sailor’s eyeballs, don’t just look strange, they’re also very special in several respects: what’s behind them is an interesting green alga called ventricaria ventricosa (also valonia ventricosa. it’s a single-celled alga, so the entire “pearl” is just one plant cell – one of the biggest cells in the world.
the appear virtually around the world in depths between 0 and 80 meters.
sea pearls form very tough cells (up to 5 cm in diameter) that are unattractive for herbivores, and in the course of time get covered by other algae etc. 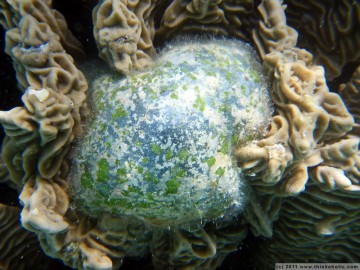 mr. "i'll roar for the photo, like a real crocodile" eats me