yesterday i had a look at my biorhythm – with a very spurring result: 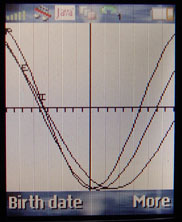 for those who don’t know: there are three lines, one for your physical, emotional and intellectual status.
and apparently i’m in THE LOW OF MY LIFE right now.
why? because the next point in my life where all the lines will be at their negative maximum will be in about …let’s see… 21252 days.
that’s because the cycles have lengths of 23, 28 and 33 days, and those numbers’ lcm is 21252.
for those who can’t deal with large uncommon numbers: that’s 58 years, 2 months and about 7 days (depending on the number of leap years)…

but actually, the low point is not the worst one. it’s said to be the point of intersection of the lines and the x-axis* – so i should already be out of the woods.
*(because there you’re used to having energy but suddenly don’t have any)
but energy is lacking the most these days, and since i can’t recuperate and am still running on a sleep-shortfall, i’m feeling pretty low.
that’s why i didn’t really feel social lately – just in case you wonder.