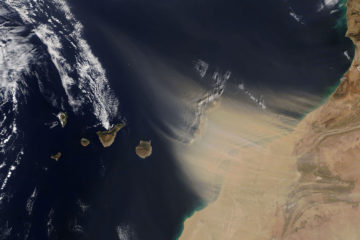 The Canary Islands recently saw a massive sand storm which shut down all airports on the archipelago, and resulted in hundreds of cancelled flights.
I recently submitted my claim for refund of incurred costs due to the cancellation – after verbal and written confirmation by customer support that we would be covered – but received only a short refusal from our carrier Norwegian Airways (full response below):

Unfortunately, we’re unable to cover the expenses claimed as we’re not liable for such costs, because the disruption was caused by extraordinary circumstances.

Regardless of the circumstances, if your flight is cancelled you always have the right to one of the following options: reimbursement of your ticket, re-routing or a return flight as well as the right to assistance.
You may also have a right to compensation (if you were informed less than 14 days prior to the scheduled departure date). However, compensation is not due if the carrier can prove that the cancellation was caused by extraordinary circumstances.

Assistance is specified more clearly on this page:

Assistance in the event of cancellation

Airlines should offer you and provide assistance free of charge while you wait. In the event of travel disruption, you should make yourself known to the airline, to avoid a situation where you have to make your own arrangements. Airlines should also ensure, where available, that accommodation is accessible for people with disabilities and their service dogs. The assistance to be provided includes:

(Damn, i should have asked them for two telex! Actually, what is telex?)

Below is the full response by Norwegian Airways (in which the response contradicts the referenced “legal basis”; see underlined sections). I have already contested their rejection — see update below.

Unfortunately, Norwegian flight D85102 (TFS-MUC) 23.02.2020 was cancelled due to adverse weather conditions. This disruption was caused by extraordinary circumstances which could not have been avoided even if all reasonable measures had been taken.

On this occasion, we’d be happy to reimburse the following costs:

Unfortunately, we’re unable to cover the other expenses claimed as we’re not liable for such costs. For information regarding the legal basis for the reimbursement of financial losses in the event of a flight disruption, please see below*.

We apologise for the inconvenience caused on this occasion and hope to have the opportunity to welcome you on board a Norwegian flight when you next choose to travel.

* Legal basis for the outcome of flight disruption claims

In the event of a flight disruption, we will always provide assistance (e.g. overnight accommodation, meals, telephone calls, transport) according to EU Regulation 261/2004. In the event that a passenger incurs such costs during a disruption, we will reimburse within reasonable limits if the expense was deemed necessary and an itemised receipt can be provided. We will not reimburse such costs if the passenger did not allow us the opportunity to provide this type of assistance, or if the costs were incurred following a missed onward flight with Norwegian in a separate booking, or if the alternatives available to the passenger were not suitable. We’re also unable to refund the cost of our ticket if the passenger travelled on the disrupted flight. A refund of the Norwegian ticket will only be provided if the flight is cancelled or delayed by 5 hours or more and the passenger chose not to travel. If the passenger is entitled to a refund of a new ticket (with Norwegian, or another carrier), we will only refund the cost of the new ticket, or the difference between the new ticket and the Norwegian ticket if the Norwegian ticket has been refunded.

Any consequential losses incurred as a result of the disruption will only be reimbursed if the reason for the disruption is within our control. If we do not consider that adequate measures have been taken by the passenger to ensure that they will reach pre-booked arrangements (e.g. connecting transport, accommodation, events etc.) we will not cover these costs even if the disruption is within our control. Likewise, we’re unable to cover consequential losses that cannot be documented, expenses that the passenger would have incurred even if the flight had not been disrupted, or unnecessary legal representation for the submission of such claims. According to the Montreal Convention and the decision made by the Norwegian National Enforcement Body in case 1222/2016, the passenger is not entitled to reimbursement of consequential losses if all reasonable measures were taken by the airline to avoid the technical difficulties that caused the flight disruption. According to EU Regulation 261/2004 Article 12, extra costs not directly associated with the provision of assistance outlined in this regulation may be deducted from standard compensation. For more information regarding your rights, visit www.norwegian.com/rights.

The outcome of this claim is based on the confirmed reason for the disruption of the flight/flights in question and can be used for insurance purposes if necessary.

If you are not satisfied with the outcome of your complaint or claim with us, you may wish to contact the National Enforcement Body in the country where your flight took place. Visit norwegian.com/neb. Please be advised, we are not currently signed up to an Alternative Dispute Resolution provider.

We are also required to inform that an Online Dispute Resolution (ODR) platform has been set up by the European Commission providing access to alternative dispute resolution (http://ec.europa.eu/consumers/odr/). We are currently not subscribed to the ODR platform and any complaints or claims submitted here will not reach us.

Update 2020-03-23: In their response, Norwegian Airways just referred me to the Spanish aviation authority, where I could “have my case evaluated”:

We appreciate that you disagree with the outcome of this case and as such, you have the option to have your case evaluated by the National Enforcement Body of the country where the disruption occurred.

Given that the airline has confirmed, in the past, that the incurred extra costs due to the delay would be covered as outlined above, and that they state the same thing on their website, it seems fairly clear to us that they’re just playing for time, assuming that most customers wouldn’t go through the extra effort of submitting a complaint in another country and foreign language.
“Playing for time” may be doubly true, as it turns out that Norwegian Air Shuttle hasn’t done well financially for some time, even before Covid-19.

Thus, we have submitted a complaint with the spanish state agency for air traffic safety (AESA), who have contacted Norwegian Air International for a report, and aim to process the complaint within 90 days:

Dear Sir/Madam;
We herein confirm you the reception of your complaint against NORWEGIAN AIR INTERNATIONAL, received in the Spanish Aviation Safety and Security Agency (AESA) on 23/03/2020. We inform you that the reference number assigned to your complaint is […].

Bearing in mind that the incident described may constitute an infrigment of Regulation (CE) 261/2004 of the European Parliament and of the Council of 11 February 2004 establishing common rules on compensation and assistance to passengers in the event of denied boarding and of cancellation or long delay of flights, AESA has
requested a report about such incident to the air carrier.

Within the timeframe of 90 days from the reception of your claim/complaint in AESA (or 120 days in some complex cases), you will be provided with an answer, highlighting what your rights are and, where appropriate, mechanisms for their return.

Finally, we inform you that the investigation initiated by AESA in relation to your complaint, does not affect your right to initiate legal action against the carrier by reason of the incident, or interrupt the time limits set for bring such actions.

I will update this post when I hear back from AESA…