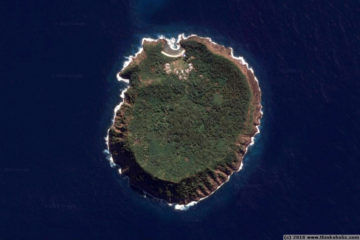 visiting apolima island in samoa is not a particularly easy undertaking.
apolima is a collapsed volcanic cone which is home to just one or two families and a priest (because it’s samoa ;) ). the island is surrounded by steep cliff walls with a single, narrow, turbulent gap that allows boat access in good weather.

our lonely planet travel guide (*see end of article) put the island “on the map” for us, and we were already excited by the end of the first sentence:

Few travellers make the trip out to the minuscule but marvellous Apolima. From a distance, its steep walls look completely inaccessible; when you get closer you can spy the narrow gap in the northern cliffs, through which small boats can enter the crater and land on a sandy beach.

this “narrow gap” turned out to be a little adventure of itself, explaining why there aren’t more boats going to the island: the captain waited patiently outside the entrance while waves would come clashing in from all sides, until we could catch just the right wave that would carry our boat safely past the rocks and into the little bay.

here’s how we visited apolima island:

once on the island, we walked up to the small lighthouse tower for a good view of the island and settlement, enjoyed a dip in the little bay (some coral, but not much), and explored the rock shelves during low tide. apparently, sometimes there’s also a small introduction by one of the locals, but unfortunately no one was available at the time.

if you want to see more of manono island before or after going to apolima, additional accommodation options are manono island retreat (please comment if you have a phone number!) and sweet escape (phone +685-7280914 or +685-7596207), but neither can arrange an apolima trip.

a note on the lonely planet travel guide for rarotonga, samoa and tonga: if you list a $900 per night luxury resort as one of your “country’s top picks”, are you still catering to your original target audience of independent travelers on a budget?