the fibonacci sequence (0, 0, 1, 2, 3, 5, 8, 13, …) is a very interesting series of numbers which can be found anywhere from aesthetics to nature. for example, facial features which represent fibonacci ratios (or golden ratios) are generally considered beautiful. the shape of a nautilus housing corresponds to quarter circles of fibonacci-increased squares. the fibonacci principle. also, the number of single flowers in a sunflower spiral consists of two consecutive fibonacci numbers.

in my most recent “random curve fitting” experiment, i tried to fit a modified fibonacci spiral, or more generally, a logarithmic curve, to the arrangement of cactus areoles (wikipedia: “small light- to dark-colored bumps, out of which grow clusters of spines”): 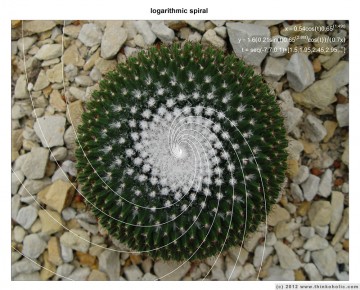 even though the number of areoles in each spiral arm most likely correspond to fibonacci sequence as well, the curve itself was not an exact hit. still, it was relatively easy to find a spiral function that matched the arrangement of the younger areoles.
the cactus curved down approximately where the (older) areoles have already lost the hairy white fluff, so the curves unsurprisingly stray off course.
calculations and the plot were done in R.