i had to see it to believe it: there’s a subway restaurant in tirol! 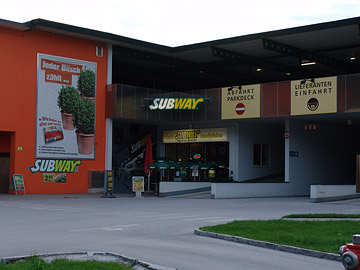 my tomtom gps (fully equipped with subway POI’s) didn’t know about it, and the official subway restaurant locator doesn’t even mention austria at all. i’ve never seen any ads out either.

i was in the area last week, and when i stepped in, i had a big smile on my face that reached from one ear to the other. it was like a flashback from the first time i ate there, somewhere in new zealand. back then, i was completely confused with all the choices i had to make.

mhhhh, subway!
i would post the photo of me eating the sandwich without unwrapping it, but i look like i’ve been constantly awake for …about 7 weeks. ;)